The challenges facing the industry in 2017 were discussed at the Sixth discussion forum “Construction in 2017 – prospects and challenges”. The event was organized by the Bulgarian Construction Chamber (BCC) and Stroitel Newspaper. The forum was hosted by the Chairman of the Board of BCC Eng. Svetoslav Glosov and a special guest was Jean-Louis Marchand, President of the European Construction Industry Federation (FIEC). 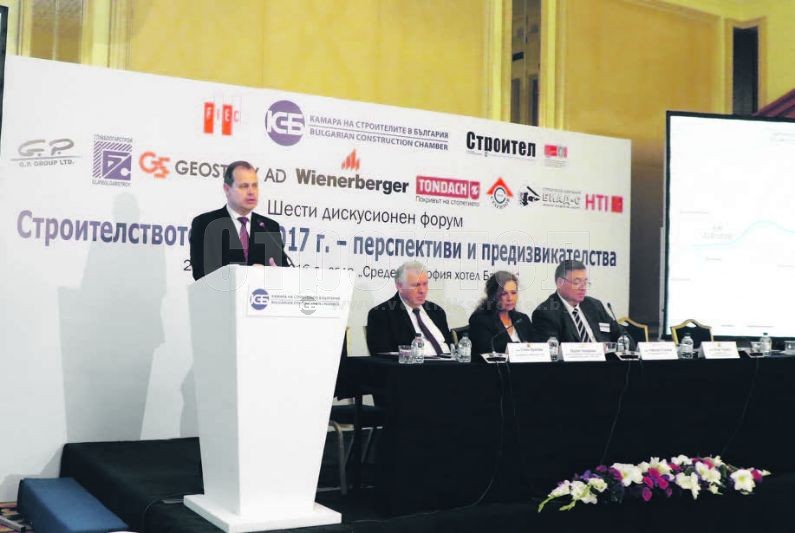 Eng. Svetoslav Glosov welcomed the guests and then a video message to the participants made Vice President of the European Commission in charge of Budget and Human Resources Kristalina Georgieva.

“In six years ahead in construction will be invested at least BGN 15-16 billion. And that does not include any new energy capacities in the field of energy and investments in the gas sector. And in both cases we could talk about construction.

I think BGN 15 – 16 billion is rather lower limit of the expected funds,” said Deputy Prime Minister Tomislav Donchev at the opening of the discussion. He stressed that BCC has always been the benchmark for professional organization and therefore the country’s partnership with it is so strong. In connection with the established cooperation with the Chamber Deputy Prime Minister called for a firmer and tighter approach to the inter-professional regulation. According to him, the state has controlling bodies and mechanisms but there are processes that are appropriate to be fulfilled by the sector itself. According to Tomislav Donchev, a bunch of poor practices in the sector are to the detriment of everyone, including the reputation of Bulgarian builder. These are the long chains of formal or informal subcontractors, lack of payments along the chain, lack of clarity who built what and who is finally responsible. These practices do not help anyone – neither the contractor, nor the project manager or the reputation of the contractor. 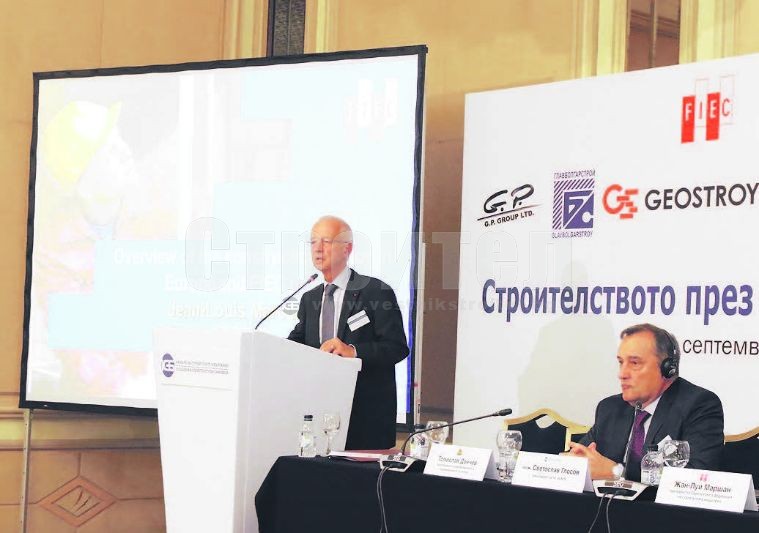 “Dear colleagues, I am convinced that you have sufficient mechanisms for this to be very limited. The Bulgarian builder typically has a high reputation. Let’s keep it not only in the country,” he said to representatives of the industry.

Deputy Prime Minister called BCC to be a partner of the state and in the sphere of education. He stressed that if we want in Bulgaria to have a strong construction industry and more competitive on the European market, this cannot happen without investment and reforms in the educational system.

Minister of Regional Development and Public Works Lilyana Pavlova said that priority is completion of Struma Motorway under “OPTTI 2014 – 2020” and of Hemus Motorway  with funds from the state budget. “BCC is a perfect, very important partner for us and I especially thank them. The project for Lot 3.2 of Struma Motorway is a challenge. This is the road with most casualties and accidents. Our goal is to preserve both human life and the beautiful scenery in the region of Kresna. I think we have achieved a compromise. It is to make a split through the Kresna Gorge,” explained the minister. She stated that the section of 20 km through the zone is the most critical point for traffic accidents. According to Lilyana Pavlova, if the project to complete the motorway is not finished within this programming period, our chances to obtain European funding for it after 2020 significantly reduce.

“We expect in 2017 to be announced calls for proposals worth BGN 1.2 billion in sector “Water”, explained Minister of Environment and Water Ivelina Vasileva and thanked the staff of the Chamber who along with the colleagues from the Managing Authority of Operational Program “Environment” work hard on preparing the first standardized documents. They are ready and are presented in the Public Procurement Agency (PPA), coordinated are with the Central Coordination Unit to the Council of Ministers. 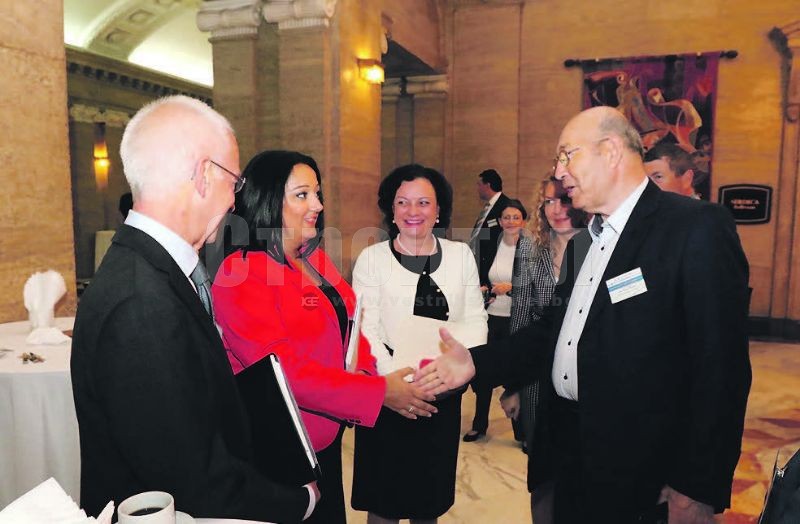 “The Chamber is one of the most active members of FIEС,” said Jean-Louis Marchand – President of the European Construction Industry Federation who was a special guest to the forum. He emphasized the need for builders to turn increasingly to public-private partnership.

The Chairman of the Board of RIA Eng. Lazar Lazarov commented that the construction of motorways Hemus and Struma and the completion of the bypass of Gabrovo are the biggest challenges facing the Agency next year. He reminded that underway are two procedures for selection of contractor for the sections of Hemus Motorway from which are to be built 26 km. These are the sections from Yablanitsa to Boaza with a length of about 10 km and 16 km on the territory of Shumen region. Eng. Lazarov explained that the construction of Hemus Motorway will rely mainly on national funding. He expressed hope that the funds for the project would be collected from toll taxes after launching the toll system. “If that happens, the whole Hemus Motorway could be ready after 2020,” said Eng. Lazarov.

Eng. Stoyan Bratoev – Executive Director of Metropoliten EAD presented the progress on the construction of the Sofia metro. He said that the third line should be ready in August 2019. Its completion depends on whether the procedures for implementation of the section from Krasno Selo to Ovcha Kupel will expire without appeals and construction will start on time at the beginning of 2017. “After launching the third line we will have three connections with the national railway network. This will lead to reduction of harmful emissions by over 110 thousand tons per year and will save over 160 thousand hours a day for travelling,” added Eng. Bratoev.

The railway projects were presented by Maria Chakarova – Director of Strategic Development and Investment Projects Directorate in State Enterprise “National Company Railway Infrastructure”. According to her, for some of them is provided funding and for others is pending the signing of contracts. “The total value of the railway projects is over BGN 1.1 billion. This means that in the next 5 years to build them will be absorbed BGN 500 million which in itself is enough challenge for us and the builders,” she said. 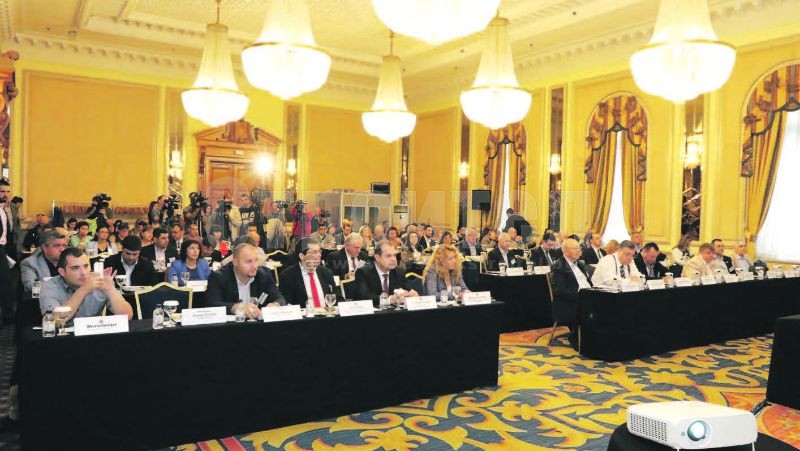 More about policies regarding the environment told Yana Georgieva – Chief Director of Directorate General “Operational Program Environment”. She said that by the end of the year will be announced 3 procedures in sector “Waste”. The first one is combined – for design and construction of composting installations and of installations for pre-treatment of waste. Its indicative value is BGN 144 million. The second one is for design and construction of anaerobic plants for separately collected biodegradable waste. The procedure for the third phase of an integrated system of facilities for treatment of household waste to СО will be announced.

Denitsa Nikolova – Deputy Minister of Regional Development and Public Works, reported progress in the implementation of both Operational Program “Regions in Growth 2014 – 2020”, and the remaining 12 programs for cross-border, transnational and interregional cooperation. According to her, the main resource of the program is expected to be spent in 2017 when public procurement orders will be ready and will be selected contractors. The projects are mainly for urban environment, transport, energy efficiency for administrative and residential buildings, social, cultural and sports infrastructure.

“By the end of the year and in early 2017 will be the strongest period for announcing tenders of the National Company Railway Infrastructure. Five tenders will be announced for the railway line to Burgas totaling about BGN 300 million,” said Galina Vasileva – Deputy Head of Managing Authority of “OPTTI 2014 – 2020”.

In the third panel of the forum Julia Velcheva – state expert in “Information Systems” Department, Directorate “Central Coordination Unit” to the Council of Ministers made a presentation on the electronic application and reporting of projects through MIS 2020. She said that for a day the system allows to be submitted over 700 projects.

“Currently, over 20 thousand customers use the module “Electronic application”. The submitted proposals can reach over 5 thousand by the end of the year. The reports are nearly 1400,” said Velcheva.

Valeria Natseva-Metodieva –Chief Expert in Directorate “Methodology, Analysis and Control of Public Procurement”, PPA explained that actively is working on the electronic trading platform. “The first challenge connected with the new Public Procurement Act is to learn, know and apply its rules. This is a task that requires efforts, practice and enthusiasm. When the law was adopted, the first meetings with the different range of interested persons were focused on the key messages of the Public Procurement Act. It was adopted in response to the trend in EU legislation, accompanied by the slogan for greater efficiency, computerization and so on,” she said.

“The Center for Prevention and Countering Corruption and Organized Crime (CPCCOC) will hold a meeting with BCC in connection with the possibilities of reducing the administrative burden and relieving small and middle-sized enterprises. We rely on the expertise of the Chamber in identifying problems and finding reasonable solutions. We need to make regulations clear and standardized,” said Eleonora Nikolova – acting director of CPCCOC. The forum continued with a discussion on current topics of the industry.

Kristalina Georgieva, Vice-President of the EC in charge of “Budget and Human Resources”: The construction sector is crucial not only for Bulgarian, but also for European economy

Thank you for the opportunity to join, even remotely, your conversation which is important and timely. I want to believe that the people engaged in construction in Bulgaria, and the institutions that determine their work, will solve the problems and will provide the guidelines the way you do it – together, in an open dialogue. The construction sector is crucial not only for the Bulgarian but also for the European economy. We owe 18% of the jobs to it, 9% of the total gross domestic product of the European Union (EU). 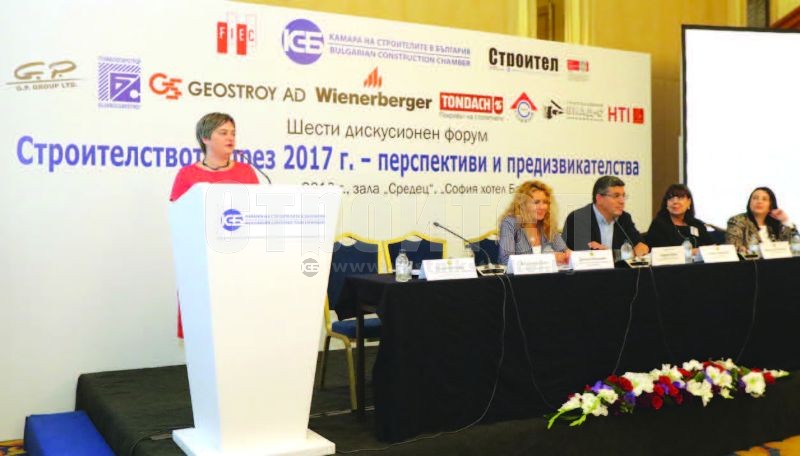 In the European Commission we are aware that this sector was among the hardest hit by the financial and economic crisis and therefore it needs more support to recover as soon as possible and add to the economic growth and employment in the EU. We do what depends on us to be able to cope more easily with the challenges. We strive to consolidate the domestic market, to stimulate demand, to open wider access to innovation in the industry. As for the European budget, for which as you know I am responsible, we have programs and mechanisms you count on and can continue to count on. The traditional investment funds, with which many of you have already experience, are available in Bulgaria. BGN 32 billion from the European budget for the period 2014 – 2020are related to programs, to which you, builders, have respect. We have special programs for small and medium-sized companies in the EU – these are 90% of construction companies.

We finance projects for energy efficiency. They are very important because we gain most if our buildings save energy and not squander it.

Through the investment plan “Juncker” we encourage innovation, including in the field of construction. I have good news that you may have heard in Bulgaria – we decided to significantly increase the financial capacity of the initiative of 315 billion euros to 500 billion euros by 2020, because we see that it works. We generated nearly 120 billion euros new investments, of which nearly half a billion are in Bulgaria. I’d like to believe that you will be among the winners in increasing the capacity of this plan, we will have major Bulgarian projects funded by it, and that they will bring new opportunities for you and will help to create jobs.

I wish all who are members of the Bulgarian Construction Chamber to be successful under the funded by Europe programs, and to be successful within our economy. I wish you more investors and markets, stability and security for your business. I know that when you construct buildings and roads, you actually build the future of our country.

I wish you more success as well to your magnificent newspaper Stroitel. It continues to prove that there are many ways to build and it is one of the best through the power of speech.