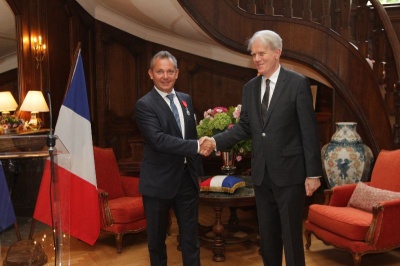 At an official ceremony the Ambassador of France to Bulgaria H. E. Eric Lebedel handed to the Chairman of the State Agency for National Security (SANS) Dimitar Georgiev the distinguishing marks of the Chevalier degree of the Order of the Legion of Honor – the highest and most prestigious award of the French state. “It is my special honor to hand it over to you, who has been contributing for nearly 25 years to build and strengthen police and intelligence tools of cooperation with its European counterparts, including France.” This was stated at the beginning of the ceremony by H.E. Eric Lebedel, the French Ambassador. The celebration took place at the Embassy of the Republic of France in Sofia and gathered the leading elite of the security services in the country. “Thanks to your determination, you do not cease to increase and strengthen trust and cooperation with France in the field of counter-terrorism, organized crime, illegal migration and the illicit proliferation of weapons. I cannot fail to mention the conduct of a number of successful investigations against international organized crime that led to the detention of perpetrators and prevented the misuse of millions of euros,” the French ambassador said. “You contributed to making SANS one of the most important and valued partners of the French services. Awarding the highest merit of France is a proof of your driving role in building efficient bilateral relations at the service of the Common European Security Area,” added H.E. Eric Lebedel.  “For me today is an extraordinary day and a great honor – to be awarded with this prestigious merit. I accept the prize as a high assessment of the work of all Agency staff and as recognition of the excellent interaction of the security and public order services in Bulgaria and in France,” said SANS Chairman Dimitar Georgiev.  “I am convinced that the interaction between our countries will continue to develop in upward direction, as well as the partnership between our securities,” added Georgiev. The Order of the Legion of Honor IS A FRENCH NATIONAL ORDER (organization), established by Napoleon Bonaparte on May 19, 1802 following the example of the Knights’ orders. Belonging to it is a top sign of distinction, honor and official recognition for special military or civil merits to the Republic of France. The adoption of members of the Order is carried out by the President of the Republic of France, who is the Grand Master of the Order (grand maitre). The Order has three degrees: Chevalier, Officer and Commander. The Legion of Honor is one of the most important institutions of the French state and one of the symbols of the French Republic.