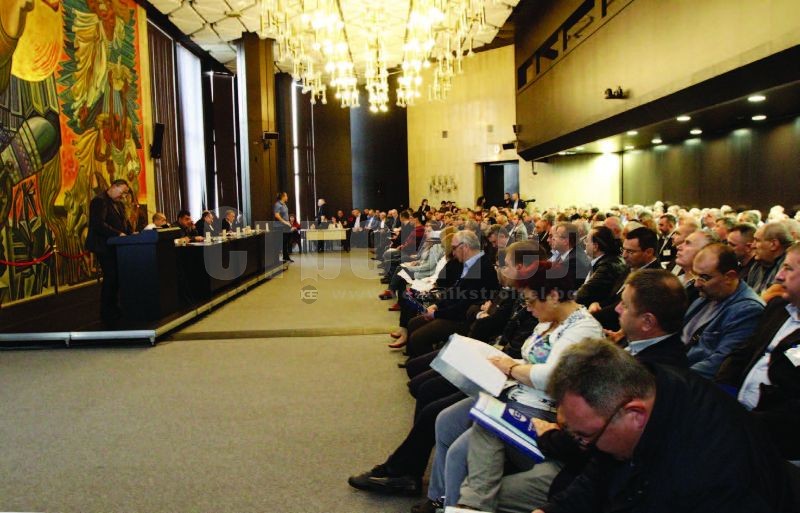 Eng. Iliyan Terziev was re-elected unanimously to serve Chairman of the Management Board of the Bulgarian Construction Chamber again for another term. This happened during the regular reporting and election session of the General Assembly, which took place in Hall 8 of the National Palace of Culture. At the beginning of the session, Eng. Terziev welcomed the attendees by addressing the Honorary Chairmen of BCC – Eng. Simeon Peshov and Eng. Svetoslav Glosov, and the Chairmen of the Committee for keeping, maintenance and use of the CPRB and of the Controlling Council – Assoc. Prof. Dr. Eng. Georgi Linkov and Valentin Nikolov, and also the members of the Management Board, the Regional Representation Offices and the veterans, and thanked them for their presence and commitment to the activity of the BCC. „I am aware that each of you has his own business, meetings, responsibilities, but what brings us together is the empathy of what is happening in the sector in which we operate and also, how is it developing, is it competitive enough? And also – what we would like to change in order to provide the industry with better working conditions and perspective, to enhance its professionalism and to make it more successful, more ethical. In respect to the efforts for establishing clarity and rules in the industry, the contribution of each one of you is extremely valuable. At today’s session of the General Assembly, we have to make a stocktaking of what we have achieved, but also what we have failed to do, what we have not had enough time for, or where we lacked support. We will elect the people whom we are going to assign the important task to implement the policies, that we are going to outline together“, added Eng. Terziev.

Prior to the procedure for election of the governing bodies of the Chamber, reports for the activities of the Management Board, the Controlling Council and the CPRB Committee were presented, for the period from 1st September 2018 to 31st August 2019.

By a secret ballot, Eng. Iliyan Terziev was elected Chairman of the Management Board of the BCC for the following three years. Blagoy Kozarev’s nomination as chairman of the Controlling Council was supported, and Assoc. Prof. Dr. Georgi Linkov was re-elected Chairman of the Committee for keeping, maintenance and use of the CPRB. The delegates elected the composition of the Chamber’s Management Board as well. For the first time during this term, 20 of its members were nominated by the Regional Offices of the Branch organization. The composition of the Controlling Council and the CPRB Committee were also elected.

Following the conclusion of the reporting and election session of the General Assembly of BCC, the first session of the new Management Board of the organization was held. The Vice-Chairmen of the MB were approved. These are Eng. Hristo Dimitrov, Eng. Nikolay Nikolov, Vladimir Zhitenski, Eng. Veliko Zhelev and Eng. Kalin Peshov. By a secret ballot, the members of the Executive Bureau of the Chamber were elected. Besides the Chairman and Vice-Chairmen of the Management Board, it involves also Eng. Roseta Marinova, Eng. Ivan Mollov, Lyubomir Peinovski, Dr. Eng. Vladimir Voutov and Prof. Dr.Ec.Sc. Eng. Nikolay Mihaylov. On a submitted request, for personal reasons, Eng. Miroslav Maznev was released from his post as Executive Director of the BCC. Valentin Nikolov, the former Chairman of the Controlling Council, was elected Executive Director of the Chamber by a secret ballot. The members of the Management Board elected the composition of the Committee on Professional Ethics as well.