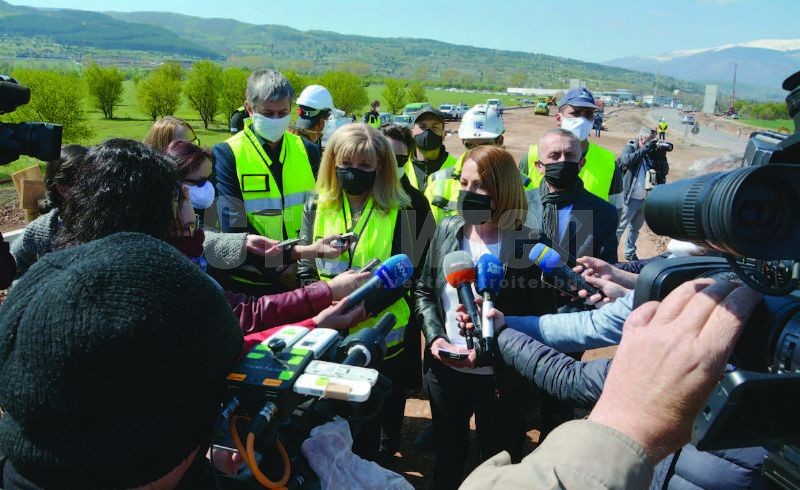 „Construction works are going on on all started infrastructure sites across the country, and there are new sections which are being launched. All administrative units of the Ministry of Regional Development and Public Works have been mobilized to a highest degree in order to maintain the pace of construction at the level that has been achieved up to now.“ This was announced by the Minister of Regional Development and Public Works Petya Avramova, after the inspection of the progress of the extension of the Sofia Ring Road (SRR) between Tsarigradsko Shose Blvd and Mladost residential district, carried out jointly with the Mayor of Sofia Municipality Yordanka Fandakova and the Deputy Mayor in charge of Public construction, Eng. Tsvetan Bozhinov.

„We should aim to make sure that the construction industry has as much as possible work to do, so that more people are employed within it“, stated Avramova. She added, that despite the state of emergency, the MRDPW continues issuing construction permits, and that since 13th March, 9 permits have been issued. It had become clear from her words as well, that she had sent a letter to the National Association of Municipalities in the Republic of Bulgaria, with instructions not to suspend the activities in investment designing, approval and issuance of construction permits.

Minister Avramova explained that the MRDPW had received from the Sofia Municipality more than 100 building plots along the SRR, situated in the section from the Tsarigradsko Shose Blvd to the Mladost residential district, and the site terrain is provided. It is over 6 km long, starting at the road junction with the Trakia Motorway. The value of investment is a little bit more than BGN 142 Million.

It is envisaged under this project, the existing two-lane road to be expanded into 6-lane road with three lanes in each direction, separated with median strip. There will be separating strips between the side local roads and the main direction road, dual carriageways and sidewalks. Four road junctions will be built – „Old Losenski pat“, „Patriarch German“, „Samokovsko shose“, „Mladost“, as well as three pedestrian overpasses, two bridges and a larger facility over a water body. The contractor for works is „GBS- Infrastructural Construction“ AD, the deadline for implementation is up to the end of 2021. „This is the busiest second-class-road in Bulgaria, with traffic load from 22 thousand to 26 thousand vehicles per day“, emphasized Avramova.

The Mayor Yordanka Fandakova pointed out, that for Sofia municipality the SRR is a site of strategic importance. Along the lenght of the last section of the Sofia Ring Road – from the „Bakston“ residential district to „Lyulin“, regulation procedures are being carried out by the Chief Architect Zdravko Zdravkov. We are going to submit the prepared designs to MRDPW and to the Road Infrastructure Agency“ she added.